Von Neumann architecture is based on the stored-program computer concept, where instruction data and program data are stored in the same memory.  This design is still used in most computers produced today. 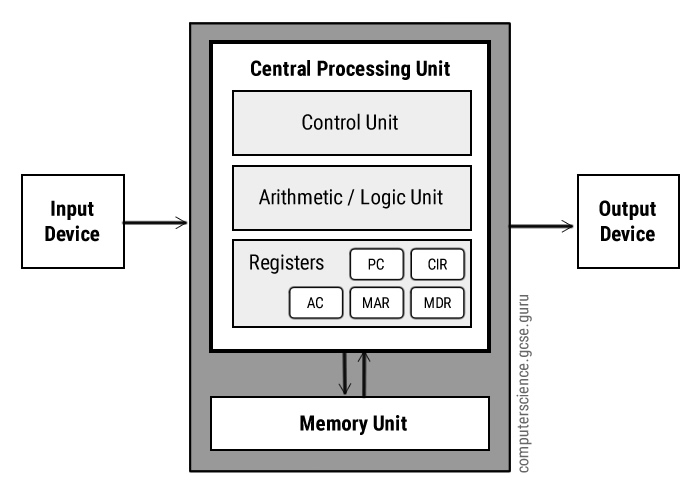 The Central Processing Unit (CPU) is the electronic circuit responsible for executing the instructions of a computer program.

It is sometimes referred to as the microprocessor or processor.

The CPU contains the ALU, CU and a variety of registers.

Registers are high speed storage areas in the CPU.  All data must be stored in a register before it can be processed.

The ALU allows arithmetic (add, subtract etc) and logic (AND, OR, NOT etc) operations to be carried out.

The control unit controls the operation of the computer’s ALU, memory and input/output devices, telling them how to respond to the program instructions it has just read and interpreted from the memory unit.

The control unit also provides the timing and control signals required by other computer components.

Buses are the means by which data is transmitted from one part of a computer to another, connecting all major internal components to the CPU and memory.

A standard CPU system bus is comprised of a control bus, data bus and address bus.

The memory unit consists of RAM, sometimes referred to as primary or main memory.  Unlike a hard drive (secondary memory), this memory is fast and also directly accessible by the CPU.

RAM is split into partitions.  Each partition consists of an address and its contents (both in binary form).

The address will uniquely identify every location in the memory.

Loading data from permanent memory (hard drive), into the faster and directly accessible temporary memory (RAM), allows the CPU to operate much quicker.