It is an agreed protocol from the early 80s that allows computers, digital musical instruments and other hardware to communicate musical instructions, regardless of manufacturer.

Unlike other audio formats that transmit representations of musical sounds, MIDI only stores or transmits commands about the music (the notes etc), and not audio signals.

Notes (events) are instructions such as:

A MIDI controller is a piece of hardware or software that creates and transmits MIDI data to other MIDI devices. 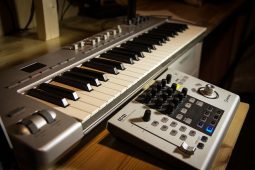 To record or edit a MIDI project, a sequencer is also needed.  A sequencer will send playback instructions (data) to any connected and compatible output components, such as a MIDI instrument, sound module, synthesizer or software synthesizer.

Because MIDI is a recording of data events, and not actual audio, it can be edited easily and played back to sound like any instrument.

Since MIDI only represents the playback information, and not audio, when stored it has a very small file size.