There is always the chance that data has been corrupted (changed in some way) during transmission.

This is true regardless of the distance of transmission.

To avoid having corrupted data it is really important that computers check for errors and correct them wherever possible.

There are several methods of error checking, with some being more effective than others.

An extra bit (parity bit) added to a string of binary code to ensure the number of 1-bits are either even or odd, depending upon the parity check system used.

This method of error checking is similar to a traditional parity check except the data is arranged in a virtual table with parity bits added to each row and column.

A single corrupted bit can be spotted at the intersection of a corrupted row and column.

A block of data is sent alongside a calculated checksum value.

The receiving computer also calculates what it believes should be the checksum.

The checksum values are then compared to see if an error has occurred during transmission.

A check digit is the final digit in a code of numbers.  It is calculated from all the other digits in the code.  It’s purpose is to spot human errors on data entry.

There are many different mathematical algorithms that can be used to calculate a check digit.  Different industries will have their own preferred method.

Good for spotting human errors such as:

This form of error detection uses a system of acknowledgements and timeouts. Automatic Repeat ReQuests are often used to ensure reliable transmissions over an unreliable service.

Acknowledgements are messages sent from a receiving device back to the original sending device.

The acknowledgement can be negative or positive.

A positive acknowledgement means that the data was received and it passed an error check.

A negative acknowledgement means that the data was received but it cannot be used as it failed an error check.  It needs to be sent again.

The timeout is a predetermined period of time that the sending device will wait to get some form of acknowledgement for the data it sent. 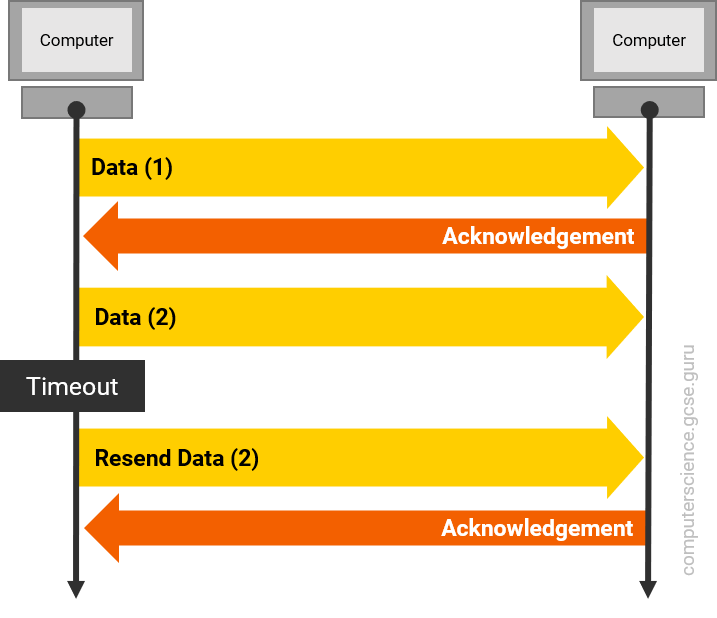 With an echo check, the receiving computer sends a copy of the data immediately back to the sending computer for comparison.

The sending computer compares the two sets of data to check if any errors occurred during the transmission process.

If an error has occurred, the data will be transmitted again.

Test your knowledge of error detection with our quick quiz.